Some of my macros coaching clients complain about feeling hungry while on the macros diet.

I want to use this article to explain what hunger is and means as well as tell you what you should do when you feel it.

Hunger is a biological response to your body’s energy balance system. Hormones are released into the bloodstream when your body’s readily available energy reserves are running low and your body has begun tapping into its fat reserves.

These hormones (ghrelin being the primary hunger hormone) signal your brain that it’s time to begin looking for food which then creates feelings of discomfort in order to get you to make the effort to replenish your energy supply.

The problem with this system is that it evolved during hundreds of thousands of years when getting food or energy took work so it was a signal to start looking/gathering/ preparing food rather than the immediate need to nourish. Hunger is a warning bell, not a system failure bell.  The human body is designed to go without food for periods of time and still function normally, but it does want you to eat eventually because those energy stores will eventually run out.

Hunger in Our Modern World

Now let’s jump ahead thousands of years and we find ourselves living in a modern world where most people in western culture have food readily available at all times. The only work it takes is to go to the grocery store or visit the drive-through.

Instead of hunger being viewed as part of the human condition and even healthy, it’s viewed as something negative that has to be eliminated the moment it arises. Never being hungry is a sign of prosperity and thus, never feeling hunger is a product of privilege, not biological need.

How many of you grew up in a house where as soon as you felt a slight bit of hunger, your parents rushed to get you a snack? How many times have you done the same thing for your kids? While for children who are growing rapidly, some of this is indeed warranted but for adults, it isn’t healthy or beneficial to eat as soon as you feel hunger.

Because it’s a warning bell and not a system failure bell, people who behave this way end up eating too much on a daily basis and thus, store that extra energy as fat. In my opinion, this is the main reason people in the west are so overweight. We’ve been taught that hunger is bad and to eat as soon as we feel the slightest bit of it.

Hunger is a healthy part of being human so instead of fearing it and fighting it, we need to embrace it. 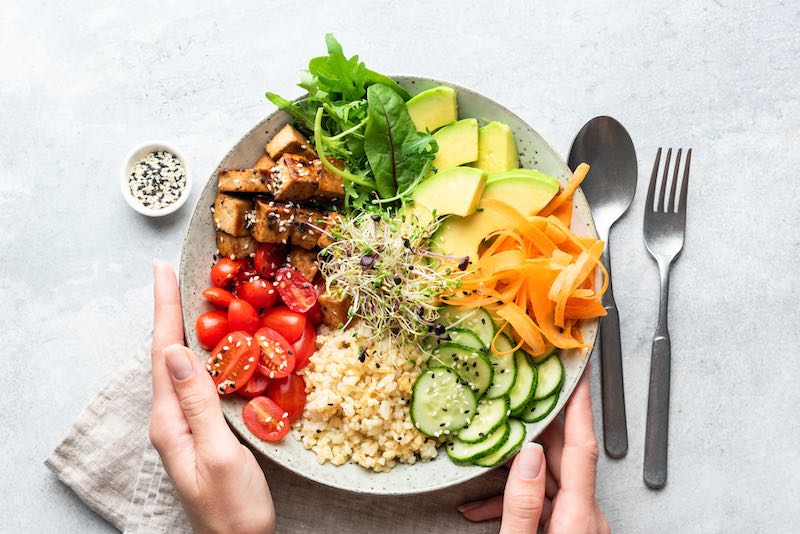 The Macros Diet and Hunger

Here are some steps to help you deal with feelings of hunger while counting macros on a macros diet.

Instead of viewing hunger as a negative emotion/feeling start telling yourself that hunger is a feeling of something good happening.

When you start eating in a calorie deficit your body will actually increase hunger hormones to keep you 230 pounds or its set point weight. This may cause you to wake up in the middle of the night hungry and even cause some people to sleep eat. It can be a powerful thing and it causes a lot of people to give up on their weight loss efforts. But, recognizing it for what it is can really help. Being overly hungry is just your body trying to stay at its set point weight and after a few weeks, this hunger will subside and return to normal levels.

3. Be in tune with your natural hunger cycle.

Humans have natural fasting and eating cycle and the more in tune you are with yours, the better.

You may have heard people say that you should start the day with a big and healthy breakfast and it’s the most important meal of the day and so forth. However, it’s more important to have this first meal when you feel hungry instead of always the first thing in the morning that you do. You may not feel hungry until 10 or 11 am and this is fine. This just means that your hunger cycle is set a bit later than others. You should start eating later and finish eating later in the day. Other people are really hungry as soon as they wake up but not as hungry in the evening. They should start eating earlier and finish eating earlier.

Be in tune with your body’s needs, not some generic idea of when you should be having your meals. Lunchtime doesn’t have to be at noon! Eat more during the time of the day you tend to be the hungriest and less when you don’t feel as hungry. 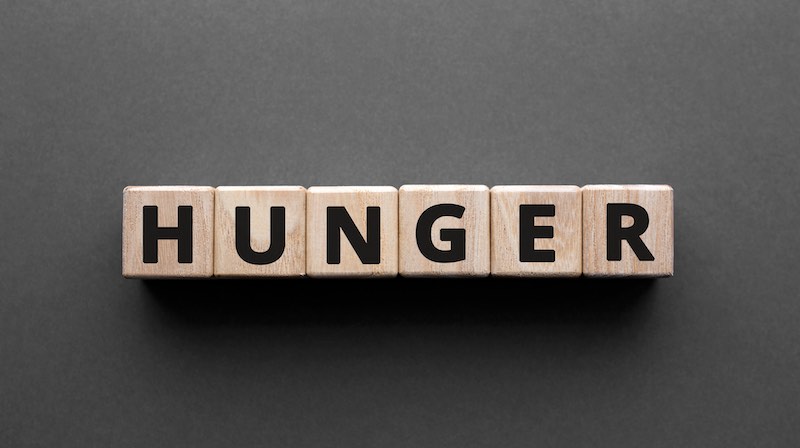 The Difference Between Feeling Hungry and Starving

In the west, we use the word starving to describe hunger and this makes it feel more dramatic than it actually is. Luckily, few of us know or will ever know what it feels like to be truly starving and unable to obtain food.  Sadly for a lot of people in the world, this is a daily occurrence.

Therefore, I think it’s important to pay attention to the language we use around hunger and not to over-dramatize it. Yes, we can be really hungry at times but for us, this is such a temporary condition since we know where our next meal is coming from.

When you do feel hungry consider that many in the world have that feeling times ten and have no means of truly alleviating it.

You will feel some hunger when eating in a calorie deficit, which is necessary if you want your body to lose weight.

Hunger is a part of life and even when you are no longer losing weight but maintaining your weight, you should still feel some hunger between meals. Hunger is ok, hunger is good.