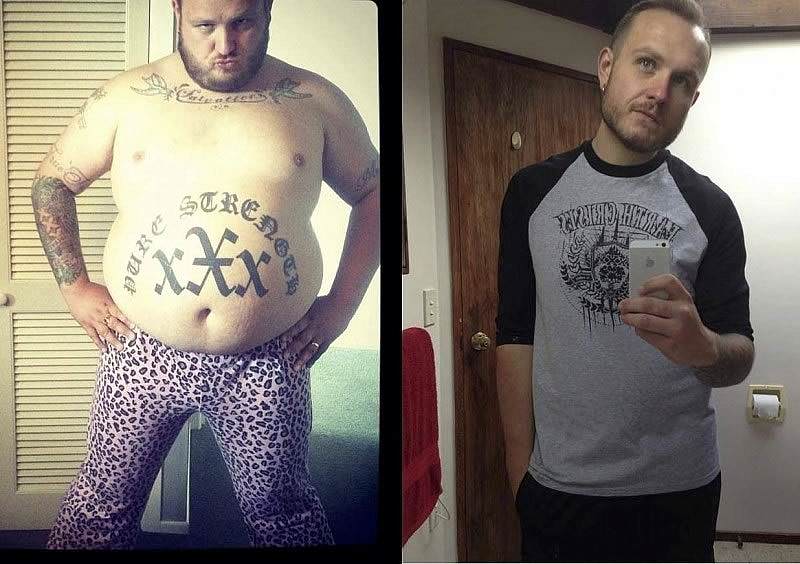 Vasely and his wife, Helen, are two people I find very inspiring. Their stories are both unbelievable and motivating. They are equally both a heart-warming Disney moment and as well as a swift kick in the pants.

I’ve known Vasely for a number of years through playing music together. I was always amazed at how such a big guy, affectionately known as “Pig”, could still rock out on stage. After I stopped playing music regularly our friendship was demoted to social networks.

Recently he posted some photos of his weight loss journey online and I became desperate to find out the story behind the transformation. Below Vasely has been kind enough to answer our questions.

I was fat my whole life. Being raised by mum and my grandparents in Belarus, before moving to New Zealand when I was 7. I woke up every morning to the smell of a cooked breakfast, which was usually fried sausages and potatoes cooked in butter.

I developed a taste for sugar and carbs from a very young age and obesity was just a part of my life.

Through school, I was always bullied for being the fat kid. My weight was always just a part of my identity and was not something I ever felt overwhelmed about.

My wife’s mother is a nurse and after spending Christmas with us she followed up with a phone call. She said “Hey, I don’t mean to pry into your life, but I see sick people every day. Vasely’s breathing is abnormal and if he doesn’t do something about his lifestyle he is going to die”.

I eventually decided to transform my body because I got so fat that I could hardly move and so sick that I almost died. That was a huge wake-up call for me.

Helen met a friend who had lost a heap of weight, before having a gastric bypass surgery, on a diet called Optifast. She decided that she would give it a go, having (like me) tried numerous things in the past. She started Optifast and the results were incredible. In a few weeks, she had lost over 15kg and I had to join her.

I started Optifast and the results were mindblowing. I found out about how ketosis works and was really motivated. I lost over 7kg in my first week and I kept losing weight at a rate of at least 10kg per month. Before I knew it I was lighter than I had ever been in years and was feeling amazing.

After losing over 40kg on Optifast, I have transitioned into eating an HFLC (high fat, low carb) ketogenic diet which is perfect for maintaining or cutting weight, gaining lean muscle mass and getting stronger.

Check out my wife’s site for helpful info and advice about keto eating at www.xhelensarahx.com Absolutely. Before I lost weight, exercise was never even a possibility let alone something I was remotely interested in. I struggled to stand up on stage for 40 minutes with my band simply playing guitar and banging my head, let alone doing anything physical.

I was so fat that I found any physical activity over and above walking a few meters from the car to the nearest fast food store an absolute nightmare.

I remember downloading the Nike+ running app on my iPhone and heading out on my first run. I would have been around 160 kgs (350 lbs) at that time. I got halfway around the block in my street and I nearly passed out. I returned home drenched in sweat from running literally 200 meters and I was breathless and felt like I was going to die.

I decided to try again and again and eventually started hitting milestones… 1km, 2km, 5km, 7km, 10km. It was hard work, but it was worth it. I am now running my own personal quarter marathons regularly and I absolutely love running. My legs are strong and it’s really helped me with toning as I have lost the weight.

MyFitnessPal app is also a great tool to have on your smartphone for calculating your calorie intake by inputting your meals or scanning the barcodes of the things you eat (and they have almost every single product you can imagine loaded into their database, making life very easy).

Did you find you became obsessed with food or felt like the diet was taking over your life? How’d you deal with that?

Some of the things I have struggled with are moderation, consistency, and seeing this as a lifestyle change and not a ‘rush to the end goal’.

I found myself being super strict about eating and exercising at times (because naturally, I am an extremist), without too much consideration of those around me. Vasely and his Wife, Helen – Before and After

If I could go back a year and do anything differently, there would not be a whole lot that I would change, although I would try and be less of a ‘food martyr’ as my wife likes to call them (haha).

Sometimes I would exclude myself from social activities because I knew that I would be too tempted or weakened by food. I would offend and annoy people and sometimes I would make comments about other people’s nutrition, which would have been best left in my head.

What Aspect of your journey has challenged you the most?

The greatest challenge is just to keep pushing and to not give up. I feel like I have succeeded in this.

The other challenging thing has been to see myself as a healthy and fit person, and no longer as a ‘fat person’.

I battled body dysmorphia issues for a few months this year, but I seem to have come through the other side with a healthy mind and self-perception, finally adjusting to who I am, not who I used to be. Vasely tracks his runs with the Nike + app

To continue getting fitter and stronger. One day I would like to empower other people by offering some kind of mentorship to those who are trying to transform their bodies and lives once and for all.

I feel that my experience has been so genuine and natural that I could get anybody in my position to truly turn their lives around if they’re willing to commit.

It really isn’t impossible, and I know how it feels to have no hope and resign mentally and emotionally to obesity.

Every day, every week, and every month my results get better and better and I am going to continue. In turn, I’ve been able to inspire and motivate hundreds of others around me to make healthy choices in regards to health & fitness.

Some of my most unlikely friends and fans reach out to me saying my story and life change has also changed their lives and inspired them to start their own transformation journeys, which I find totally crazy.

What advice would you give to others aspiring to change their bodies?

You may feel like you have tried everything under the sun to lose weight and you’ve failed and decided that you are just destined to be fat or unhealthy… this simply isn’t true. I know how that feels and I just want you to know that there are simple calculated, scientific methods that will make your body burn fat instead of storing it.

I am happy to share my journey and tips with anyone who has the will to actually commit and put them into practice.

Disclaimer: Your results may vary and Vasely’s were largely due to his dedication and adherence to his calorie/macro protocols.

Ted Kallmyer is an ISSA certified Specialist in Fitness Nutrition, is an expert macros coach, and the author of The Macro Solution. If you need personal help reaching your weight loss/fitness goals see his nutrition & macros coaching options. Follow Ted on Instagram
Last Updated: October 10, 2019