If You Want to Lose Weight, You Have to Start Eating! 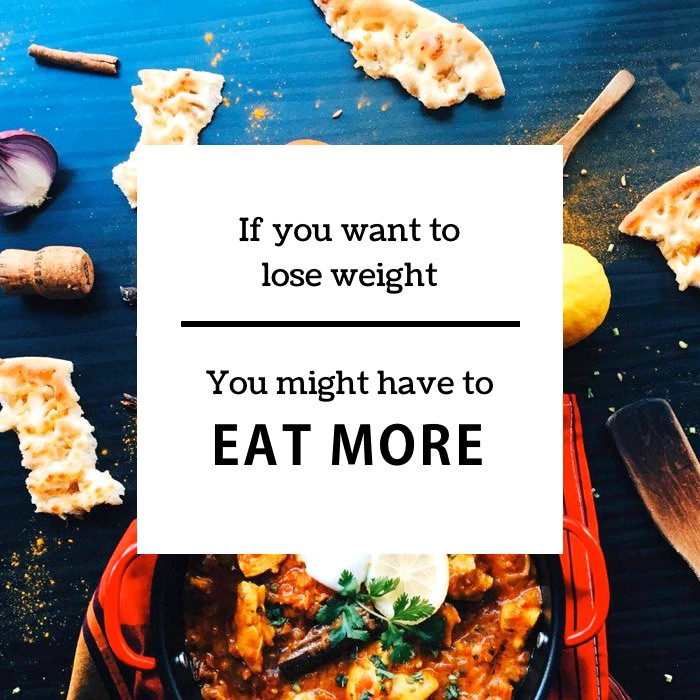 One of the most common comments or concerns of those starting to count macros or flexible dieting is about the amount of calories or macros they are expected to eat.

It can seem really strange to eat so many calories when you’ve been told all your life that the only way to lose weight is to follow a low-calorie diet.

But, for many, eating more is actually the key to losing more. Here’s why.

Why You Must Eat More to Lose More

In the above example, this woman was accustomed to eating 1300 calories. She would probably burn about 400 calories at the gym, which would only leave her 900 calories to fuel her bodily processes and general movement on exercise days.

According to our calculator, her sedentary calories are 2218 just to maintain her current weight. Therefore on exercise days, she is putting her body in a 1318 calorie deficit.

Our basic understanding of weight loss principles would say, “wow, she should be at her target weight in no time!” but, the body doesn’t quite work that way, unfortunately.

Your body is a very complex machine and its goal is survival, even at the cellular level.

A few days of drastic calorie deficit are fine and cause no changes, but for those that consistently eat at dangerously low calorie amounts the body switches into a conservation state or what some people call starvation mode.1

Our bodies are very clever and we still don’t yet fully understand all of the ways it can survive when placed in stressful situations.

This explains why some people who have been stranded at sea can survive for months on practically nothing. The body begins to slow down the metabolism in an effort to maintain homeostasis in light of a drastic calorie deficit.

A similar thing happens for extreme dieters. The body slows things down, slows the burning of fat, and actually begins to breakdown muscle tissue for energy especially if the dieter is also engaged in weight training. Muscle Catabolism is simply when your muscles are broken down by the body and used as fuel for other parts of your body.

Drastic calorie deficits can cause this as well as not eating enough protein. Your body can break down one muscle group to build and repair the group you just worked out and then vice-versa later in the week when you work out the other muscle group.

One study showed that instead of fat loss occurring and then muscle loss during starvation, they both can happen in parallel to each other.2,3

The Solution is To Eat!

Unless a dieter is morbidly obese and under the direct care of a physician, he/she should never have a calorie deficit of more than 400-500 calories or 20% less than their TDEE calories with the calories burned during exercise factored in.5

For those that are already pretty lean, but just have 5 pounds to lose, calorie deficits can be even smaller.

So, make sure you are eating enough to support your bodily processes and the growth and activity of your muscles, but not too much that your body won’t burn a small amount of its fat reserves each day to make up for the slight deficit you are in.

It can be really challenging for some dieters to eat more, especially if they have been doing low-calorie diets for a large portion of their lives. It can also be challenging for people to eat the amount of carbs recommended with flexible dieting especially for those that have had “carbs are bad” drilled into their heads for so long.

It’s time to start eating again and come into a better relationship with food. Slow and steady weight loss is the goal with flexible dieting and this, unlike other diets, is sustainable over the long-term because you are able to eat and not feel deprived.

Here’s a comment from someone who started to eat again.

Thank You so much! I’ve been on it for a week. I meet my macros, but having a hard time getting all the calories in, I’m not eating under 1300 anymore but always end up around 1500 at most – it’s not much difference but my body feels great; I recover much better and I am eating more carbs than before but not yet the 205 recommended. I’m still at 60% this week but next week I’ll amp up to a 70%, my body has already started to change.

I also want to express the importance of managing expectations when doing the flexible diet or any diet.

There are many different body types and most people may never be able to achieve the body that has been Photoshopped on the cover of our fashion or fitness magazines.

For women, nature is actually working against the quest for a low body fat percentage. A woman’s hormones are constantly preparing the woman’s body for childbearing and this means a healthy layer of body fat.6 Just look at the body fat percentage differences among men and women. So, focus on getting healthier by eating nutritious food, eating enough food, and being more physically fit because usually only those that get paid to look like ultra-ripped athletes actually have the time and resources it takes to look that way.

In closing, I can’t express the importance of working to change your low calorie and low carb mindset and begin eating again. If you want to break free from a slow metabolism and break the weight loss plateau then you have to give your body enough fuel to leave the launch pad.

Ted Kallmyer is an ISSA certified Specialist in Fitness Nutrition and is our lead macro coach. If you need help reaching your weight loss/fitness goals see our personal coaching options.
Last Updated: November 5, 2019

Ted Kallmyer (aka Healthy Eater) is an ISSA Certified Specialist in Fitness Nutrition and a Certified Fitness Trainer. He is both Healthy Eater’s author and nutritional coach. He also has a bachelor’s degree in biology and a master’s degree in education.